Progress! This week has felt much better than last week, and I can definitely feel that foundation starting to take shape. Running in the teens is hard. I realized that with an experiment on the treadmill. Instead of doing Monday’s walk 1-run 2-walk 1-run 1 all outside, I did the first mile walk outside, and then the 2 miles running on the treadmill, and it felt waaaaaay better than my last outdoor 2-miler. This is probably less noticeable once one is in better fitness, but I think in these early stages its using too much of my available energy to just stay warm.

Other than that, I have been having fun finding the hilliest places I can to get solid walks in. I did a mile brisk walk in Croft Farm on Wednesday, followed by ten laps up and down the steep little hill near the bridge, reversing direction after five. That felt very similar to a good hike on rough terrain. Then I finished with a brisk walk around the park. I know that most runners balk at walking, but later that afternoon I felt like I got a serious workout in. I believe that if the route and intensity is right, a three mile walk can be just as beneficial as an easy three mile run.

Let’s talk about about the weather!

Someone on one of the many running groups I follow recently asked people to share their favorite forms of motivation for getting out in the cold weather. Of course my first thought was riddled with sarcasm (a life-long problem that I blame on my parents and birthplace), but as I muddled over the question I realized that I truly do believe in this one: buy expensive clothing.

Now to be clear, I rarely ever spend a lot of money on running gear, but I certainly own a lot. Thank you Haddonfield Running Co and your sidewalk sales! There is nothing like getting to don your newest high tech jacket on a chilly January day.

This might seem like an obviously good idea, but when I was younger I barely had the money for personal hygiene products let alone fancy running pants. But a shift occurred after I was fortunate enough to spend a solid year living in Hawaii in the mid-thirties. On my first day on Oahu I surfed. Yes, it was straight out of a movie. I checked into my youth hostel, and without unpacking my suitcase I grabbed my board and headed down to Waikiki Beach for some tasty waves. All the locals were wearing half wetsuits, so I figured I should as well. It was October, and I guess they felt a chill in the air. Who was I to argue.

That was the last day I wore a wetsuit in Hawaii. I even surfed at midnight during the full moon. No chill. Ever.

One year later I was heading back to the east coast, and I was downright petrified of what the cold would do to me. I never liked the cold, and I knew that I had become a massive wimp living near the equator.

Since I began this story on my first day in Hawaii, I should tell you a little about the last day, even though it has nothing to do with running or the cold. I easily surfed over 300 days that year. I would have surfed 365 if it weren’t for working 60 hours per week as the beverage manager at the Hilton, some days spent hiking, and some intra-island travel. I never once paddled out to flat surf. There were less than epic days, and there were some totally freaking epic days, but never a complete lack of waves. That is, until my very last day on the island.

I made sure I was completely ready for my flight the day before, planning to spend the whole entire day surfing. I had a big breakfast, then walked down Liliʻuokalani Avenue one last time to the Queens break, where I saw . . . nothing. Flat as a sheet of glass. I had suspicions that Hawaii was messing with me that whole year, and the view off the beach that morning left me with no doubts. She had quite a sense of humor.

I paddled out, and spent a solid eight hours swimming with the turtles. I had seen turtles on occasion that year, but I realized that the calmness of the ocean brought them closer to shore. Of course no one else bothered to paddle out that day, so it was just me and the turtles. All day. We had a fantastic time.

And then I was in New Jersey.

I took my last pennies and went to the mall where I bought the warmest winter coat I have ever owned. Then I bought some thick socks, which I never really owned, and good ski gloves, and a couple of thick hats. I think it was a mild winter, but I was warm all the way through, and I have never looked back. In the years since I have learned to love the cold, and a big part of that is being very well prepared. It is really interesting how priorities shift as we age. I would now say that warm winter clothing is one of the first things I spend money on, as opposed to the very last.

So how do I dress for a run in temps in the 20s? Layers of course. Lots and lots of layers of high tech fabric. Something I learned after developing some reynauds syndrome is that it doesn’t make much sense to wear layers everywhere except your head, hands and feet. So my winter wardrobe begins with lightweight, synthetic socks, gloves, and hat. Then its thicker socks, outer gloves, and a thick hat. From there I wear SportHill running pants under lightweight, stretchy pants (don’t get me started on running in pants without pockets), synthetic t-shirt, long sleeve shirt, and varying thicknesses of jackets. If its really cold I throw some mitten shells over the gloves. 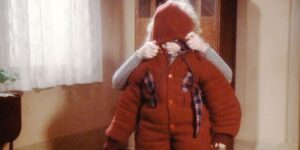